Natural gas is extracted from shale rock formations deep under the ground. It is considered an ‘unconventional’ gas because it is so deep under the earth’s surface that it is more expensive and invasive to extract.

Fracking is a complex process – essentially it is a mixture of water, chemicals, and sand that is injected into the ground (sometimes more than a kilometer deep). With intense pressure, the water and chemicals fracture the shale rock, and the sand holds open miniature cracks releasing the gas. It then travels up the well shaft where it is captured. 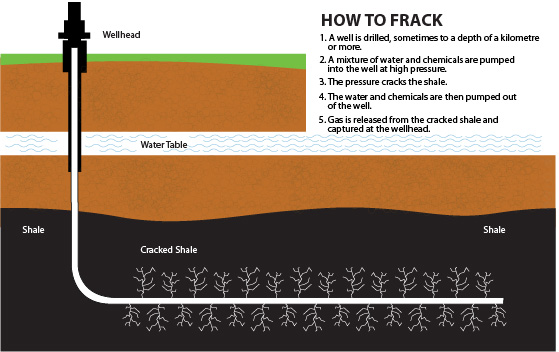 Leaching methane from gas wells, contaminants in the environment, freshwater use and an increase in earthquakes caused by fluid injections are all common and increasing concerns with fracking operations.

When shale gas is captured at the gas well site, some methane leaks into the atmosphere, often referred to as ‘fugitive emissions’. On a local scale, fugitive emissions can contaminate local water sources. Globally, climate scientists believe fugitive emissions will exacerbate climate change because methane is one of the most potent greenhouse gases.

There are already some 30,000 gas wells drilled in Northeast BC (also known as Treaty 8 territory), of these about 7,000 are active today. In 2004, the Assembly of First Nation conducted a study funded by Health Canada. This study investigated the impacts of fracking on local wildlife, such as moose, deer, and elk. The study confirmed that waste pits and flare pits both contained levels of contamination above provincial and federal standards. These waste pits attract nearby wildlife that ingest the chemicals. As a result of these toxins, hunters are finding game with tumours, abscesses, and foul smells.

There are a number of concerns with fracking that have lead provinces, such as Quebec and Newfoundland and Labrador, to place moratoriums on the technology. Local residents near fracking operations worry about the amount of fresh water that is needed for fracking. At an estimated 15 million litres of fresh water per gas well, the rate is not sustainable.

The Fort Nelson First Nation, located in the heart of fracking operations in Northeast BC, launched a petition in 2012 to raise awareness about fresh water withdrawal in their territory. They asked Christy Clark to stop issuing long-term water withdrawal licenses to the unconventional gas industry until First Nations have been properly consulted.

In November 2013, Ecojustice, the Wilderness Committee, and Sierra Club BC filed a joint lawsuit in the BC Supreme Court challenging the oil and gas companies’ water usage. Naming gas company, Encana, the lawsuit targets the Oil and Gas Commission for ongoing, and essentially free fresh water usage from BC’s lakes, streams, and rivers. Read the press release here.

A Clear Look at BC LNG: Energy security, environmental implications and economic potential

Liquefied natural gas (LNG) exports from the west coast of Canada have been heralded as economic salvation for the province of British Columbia. This report undertakes a reality check that reveals several major problems with this narrative, both in the stewardship of finite non-renewable resources by provincial and federal governments, and in the environmental implications of large-scale development.

Myths Versus Realities: …Getting the facts about FRACKING

The Council of Canadians takes a critical look at the common beliefs and misconceptions about fracking. From water use and contamination to questioning the connection between fracking and earthquakes, this 4-page overview contributes to the discussion about unconventional natural gas extraction.

Investigation of Observed Seismicity in the Horn River Basin

The BC Oil and Gas Commission (“The Commission”) published this study on seismic activity in the Horn River Basin. Looking at data between 2009 – 2011, the investigation concludes that the onset of earthquakes in the region (ranging from 2.2 – 3.8 on the Richter scale) were caused by fracking fluid injections. The Commission makes a number of recommendations based on these findings, such as ongoing seismic reports and upgrading seismographic and monitoring procedures.

Recognizing that there are significant concerns about the chemicals used to extract unconventional natural gas, the BC government created fracfocus.ca to provide information on fracking wells and industry regulations to the public.

BC LNG: A REALITY CHECK

The BC government has made huge promises of $100 billion dollars and 100,000 jobs from the LNG industry in the province. The National Energy Board has granted seven LNG approvals to date, which would require 50,000 new gas wells in BC. Hughes questions if this is the right path for the province and warns that it may not be wise for British Columbians to ‘count on the LNG bonanza.’

Fracking Up Our Water, Hydro Power and Climate

This report states that unconventional gas extraction in northeastern BC has the potential to create significant pollution, but because of a lack of information and failure to consult with British Columbians, development continues without proper and informed discussions. Unconventional gas extraction and exports may not be as ‘clean’ as the BC government claims it to be.